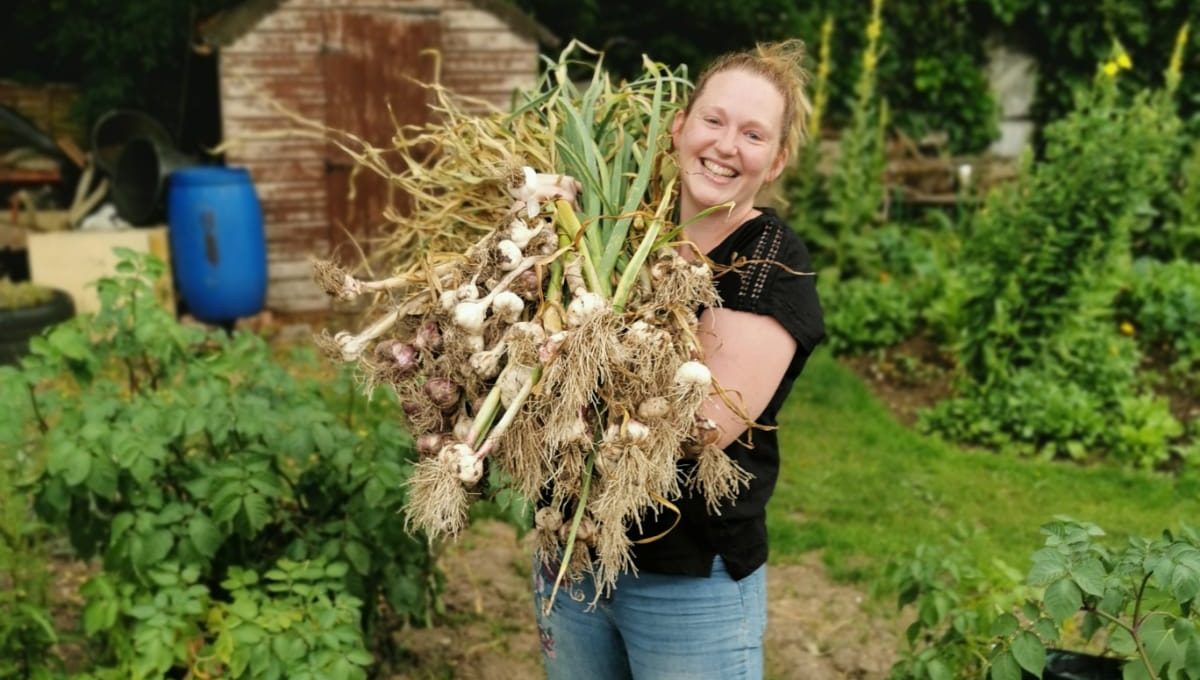 The morning I woke up on July 14th I was in Watford General Hospital after being there 9 days. Oscar was due on July 15th, my best friend was due to be 30 and it was also my mum’s birthday too. So I didn’t have too much going on. I had an awful pregnancy and this was just the icing on the cake. Up and down blood pressure, extreme fatigue, low iron, Oscar wasn’t very happy and needed to come out. When I woke up that morning, I knew. So, 37 hours later, he was born on his due date, my best friend’s 30th birthday and my mum’s birthday. After a brief nap, my husband went home to get me some fresh clothes and obvious things we had forgotten for Oscar. He came back with a letter; we’d also been offered our plot and was available to use straight away.

A few blood transfusions and we fast forward a week later. All three of us, as a new family, went to visit our new garden. We live in a flat and we don’t have a garden so to have such a special outdoor space was amazing. We pulled up, walked through the gates and……what a shit heap. The land was uneven. Only ever kept by one person who had given it up years ago and never grew anything but flowers. Some of the weeds were over 6ft tall. The ground had been trodden in so much it was rock solid. The ground had been used by the other plot members to burn waste and wood on for many years and there were thousands upon thousands of nails in the ground from all the fixings in the wood. I pulled out a dead, tall weed and I’ve never seen so many spiders in such a small space in my life. What a fantasy this was. And with a week old baby. What on earth was I thinking? So I took it on. Despite many people asking where I’d find the time etc, but it gave my husband a good opportunity to spend time with Oscar after work and for me to clear my head after being a new parent on their own with a baby all day.

I found myself being unusually tired all of the time. Gaining weight fast, in incredible and completely unreasonable amounts of pain around my joints. My hands seizing up and not being able to grip my steering wheel without constant pain in the joints in my hands, wrists elbows, shoulders, lower back, forearms and fingers. I found this pain exhausting and my hips continued to hurt so badly, much worse than when I was 9 months pregnant. I was sleeping a lot. I needed help a lot. I kept going to the doctor over and over saying I was fatigued, I slept a lot, my body felt as though it was burning, I felt generally unwell every day and even sick. I was told it was low iron and Vitamin D with a handful of post-natal depression. Despite all the medication and Fluxoetine they gave me, I still wasn’t right. I found breathing harder and even wearing a bra. I couldn’t get out of bed without crying out in pain. I mean I still can’t but I deal with it now better. I kept complaining of back pain over and over and started physio at the beginning of my pregnancy and was told my back pain was muscular and I needed to strengthen my core.

I kept going back. I started back at work again as a medical secretary and found difficulty remembering how to type on a keyboard and physically struggling with it as it was so painful. I thought that maybe my hands just needed the exercise and carried on. My back hurting worse, my hands hurting and hurting. I couldn’t understand how so many things could hurt at once. The allotment was coming on okay. I had started to get a lot of the bigger weeds and I had had some help rotovating it a few times. It was horrible work but I found every time I went, I’d be in more and more pain. I thought it couldn’t be right and maybe it was just my body recovering from pregnancy but I didn’t know it would take this long. I eventually found my job too hard to do. I found everything so very hard to do. Driving, being awake, even wash. I was eventually referred to the orthopaedics, rheumatology and pain clinics.

I found out I have 8 prolapsed discs and some of which at the bottom are causing me chronic nerve pain down my legs. After seeing several physiotherapists, pain specialists, rheumatologists and psychologists, I have been diagnosed with Fibromyalgia/Chronic Pain and Chronic Fatigue.Whilst on my journey to repair myself back to my old self again, I decided to walk Parkrun a few times with a little jogging in between. I knew the routes so why not? I was sick a whole stomach full of phlegm. This couldn’t be right? I then tried again the week after with my husband and he noticed I couldn’t breathe properly when running. I thought that I was just unfit but everything I tried, I would get far too tired too quickly, even for my standards. After that Parkrun, I had the world’s biggest headache. I was laying on the sofa crying, it was that bad. I called 111 and asked them for advice and sent me down to A&E.

All the Doctors and Nurses were just telling me it was a migraine and to not be so dramatic and to calm down. But I was panicking. I could feel pressure in my head. There was a shift change and a Junior Doctor came to me to talk to me and introduce himself. He is the only person who listened to me all day and when I said this was a headache like I had never had before and I could feel pressure from behind my eye, he sent me for a scan.He found a tumour growing in my ethmoid sinus and frontal sinus. I am having this removed in July 2019. The pressure was all of the trapped infection in my head. Another thing to add to the list.I bet you’re wondering why I’ve told you all of that garbage. There is a reason I promise.

I asked for vouchers for my birthday and Christmas for nurseries or for garden centres. Any kind of gift was garden related. From seeds to cuttings. I read up on things I wanted to grow. I made shit tonnes of mistakes and I still do but I don’t care because I learn from every single one. If I don’t try then I’ll never know. At some point, it just clicked. I wanted to do this. It took my mind away from the pain. I am limited BUT I can still grow things and I can still work around my chronic illnesses. I can work around and with my toddler. He learnt to walk there. I hate the cold and I will admit that I do avoid it but you can hardly move in the cold with Fibromyalgia – so I bought a shed heater.

I have had help along the way from friends and family and I thank them all for getting me as far as I am now. I only grow stuff so I have something interesting to talk about, think about and be completely consumed by it. My main aim is to grow for everyone. Everyone should be entitled to fresh amazing food locally and for free. Now whilst my community allotment project is a slow one at the moment, it’s something to really aim towards and I couldn’t be prouder of where I am today.

Be patient, ask as many questions as you can think of, weed, feed and just and grow something. My allotment is the core and the back bone around why I am surviving today. I love teaching people things once I’ve learnt them myself. I just want others to know how easy this is and whist I have a running plot at the moment, when I got it back in 2017, it was far from the paradise I dreamed it would be today.

Break the rules with gardening. Let’s inspire communities to grow. Sow. Be a Dirty Hoe!